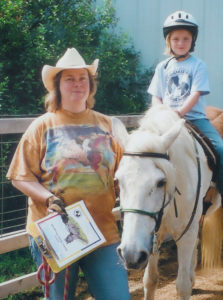 "The problem is never how to get new, innovative thoughts into your mind, but how to get old ones out."

This is my ABOUT page. It was suggested that I add pictures to break up the text. But, if you are a riding instructor, you have plenty of pictures of your own horses and students. I figure you don't need to see mine here.

I did not ride horses as a young child. I purchased my first as a clueless teen, and did not take my first lesson until I was an adult. My instructors worked under a UPHA Horseman of the Year who routinely sold five-gaited Saddlebreds for upwards of forty thousand dollars. He told me that horses are not as smart as dogs because they are prey animals. As is too often the case, because of his prestige, I blissfully believed him. Today, forty years later, there is mounting research on animal intelligence in the peer-reviewed scientific community. Maybe, we will learn that dogs are smarter than horses - maybe, we won’t. Until then, I choose to believe that dogs were or are able to become smarter because (1) they live in our houses, and (2) they remain with one human for life.

Dogs have the benefit of 24/7/365 to learn human-as-a-second-language, while our horses have a pittance of our time to learn human-as-a-foreign-language. And, the communication disconnect goes both ways. If our horses ate and slept with us day-in and day-out, they would be able to express themselves and we would be able to understand their requests as well as we can read our dogs.

Over the thirty-five years I taught novice-level lessons to mostly non-horse-owning beginners - a market sorely ignored by our traditional horse industry - I was pretty sure I understood horses. But, every so often, one of my horses, Stormy, would behave in a way that left me in awe. Storm and I shared a benefit that most horses and horse owners are denied, which is that she was born at my home, served as my son's show horse, my primary lesson horse, my personal trail horse and, in her late twenties, died at my home. She is buried behind my garage.

Storm and I were essentially co-workers forty hours a week for twenty years. Close to a thousand people took their first-ever ride on her, in addition to over three thousand Girl Scouts. I considered her my colleague, but never pondered the level of consciousness that was at work behind those beautiful eyes - until she would do something that would stop me in my tracks, leaving me wondering, "Did she really say what I think she just said?!” Have you had those moments with a horse you know or knew well?

During the four decades I interacted with professional horse trainers, members of my state horse club, and personal horse friends, I never remember having a truly substantial conversation about just how smart a horse could be. I studied in a college psychology class that rats who were taught to run mazes and press food bars developed brains that were physically firm and well shaped; while rats who spent little time thinking had brains that were mushy and poorly defined. I remember coming to the conclusion that Abraham Lincoln was wrong - all [men] are not created equal. Even in the same American city, some children are born into environments that encourage and support curiosity at a very young age; while others are born into homes without as much as a picture book. But, when it came to my horses, I simply cared for, trained, rode, and otherwise interacted with them in the manner in which I had been taught.

The natural horsemanship movement was gaining momentum a decade before I retired my Riverbank Farm. What they taught was not new. As its promoters attest, many of the training methods extolled are older than much of what is taught in traditional competition training. Nevertheless, it was incredibly new to our generation of horse owners and, compared to traditional training methods, there was much in it that I admired. While breed and discipline associations were (and still are) struggling to attract spectators, owners of every ilk were packing arenas three thousand at a time, at a hundred dollars a pop, to listen to Pat Parelli - and they were leaving with hundreds of dollars more in training materials. I ask myself today: Do horses who are trained by natural horse trainers have a greater opportunity to think? If we performed necropsies, would we find brains that are more physically firm and well shaped? Maybe. I will only go so far as to guess maybe. I am more likely to say, probably not.

When I retired my lesson program and the bustle of families no longer filled my yard, I was left with a very quiet barn inhabited by four schooling mares who had served me well. Two have since died of age-related illnesses. About that time, I read Mim Eichler Rivas' documentary, "Beautiful Jim Key." If you’ve not yet read that book, buy it now. I so wish I had when Storm was still alive. I rue the fact that she deserved so much more than the life I gave her. Never again would I look at my horses as if they were anything less whole than me. It's not like I didn't know there was a person inside a horse. Of course, I did. But, now I wondered how, for forty-five years, I could have been so ingrained in traditional horsemanship that I never wondered just how much person.

I began to consciously interact with my two remaining horses, Sara and Sparky, as if they were humans - truly as whole as me - and they became surprisingly more expressive. I explained what I was doing as I worked with them; asked them questions and gave them time to ponder. Most importantly, I gave them freedom of expression and choice. This meant, among other changes, I stopped using the cross-ties and simply asked them to stay with me while I groomed and saddled. And, I had to do this without applying a negative reinforcer if they moved off. This was a deeply humbling experience. But as weeks, then months, went by, life changed for all of us. If you ask them today, they will tell you that I still have a very long way to go.

I can't remember how I came across my first horse conscious trainer - he was online halfway across the nation - but I have since learned that there are hundreds of thousands of horse conscious owners all around the world. They share experiences in a loosely woven but exponentially growing community of like-minded people. Snippets of their philosophies are appearing in books sold into our traditional horse industry. I often will find myself reading an author’s comment about a horse and thinking about my relationship with my husband, or children, or grandchildren because we are all, after all, pretty much the same. They promote benevolent horsemanship. At its philosophical base, one would not consider buying and selling horses to salve a social quest to become the best of the best; and would not consider training a horse through intimidation.

Two years ago, at the age of sixty-three, I adopted Zena, a pregnant Morgan mare, from an auction where she was bound for Canadian slaughter. Her foal would have been hosed off the slaughter room floor. Ruby, a feisty filly, is eighteen months old as I write. When Ruby is thirty-five, I will be ninety-eight. I am trying my best, in spite of way too many years of deeply-ingrained knee-jerk habits, to raise her wholly conscious. Instead of training her to suffer learned helplessness, as much traditional training does, I would like to afford her the opportunity to grow a physically firm and well-shaped brain!

In 1998, I developed the business model and wrote the operating manual for the American Association of Riding Schools. In 2001, the business model garnered the All Industry Marketing (AIM) Award for Best New Product from the Western and English Trade Association. It was my intention that the AARS would become the nation's first franchised horse business, with the stable owners eventually developing their own Board of Directors and owning the national headquarters. Over the next decade, I met with industry leaders and offered podium talks promoting the program at national industry conferences - initiating false starts in the process. Some suggested that I turn it into a non-profit, similar to other horse industry associations. But, I felt there was retail profit to be made; and that such profits could greatly benefit small riding school owners. I still believe this. At any rate, the more time I spent inside the industry, the less respect I had for it. This year, I am re-writing the AARS operating manual and teaching materials into a format that will still prepare new riders for our traditional industry; but that will also be more deserving of respect in the horse conscious community. I feel like a politician promising to cross both sides of the aisle - not an easy job.

If you want to research the horse conscious community, I suggest you visit www.horseconscious.com. You'll get a great leg-up there, and find worldwide mentors and online friends. If you are not quite ready to do that, I ask that you stay with me as I advance this site.

I will appreciate and respect any comments you want to send my way about what you read here, what you hear and read elsewhere, and how and where your own life is evolving as you grow professionally in the industry because, collectively, we really do have an opportunity to change the world.

With respect for all you do, 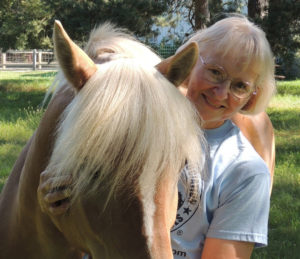 Tell me about yourself

Let me know something about your experiences as a riding instructor and/or stable owner; and what brought you to A Horse In My House. And, tell me anything else you want to say.